Steve Elkins, take thee,Terrie Baskin, to be my lawfully wedded Wife, to have and to hold from this day forward, for better for worse, for richer for poorer, in sickness and in health, to love and to cherish, till death us do part,”

With fear and trembling, Terrie came to the point that she knew she loved me.  We had been dating for some time and I was a fixture in her home. We were constantly together and it seemed logical and reasonable that we would be married.

I was working full time and going to Central State in the evenings, three nights a week. Terrie was a full time student at Central State.  Maybe, because of her personality type of being cautious, she was happy with the status quo, but I was not.  I wanted to be married and start a new life together.  I came to the point of confronting her when I told her, either we were meant to be or we were not, it’s time to get married or I’m walking!  She thought about and she agreed.  We set a date of May 25, 1974.  It was on the Saturday of Memorial Day weekend and it was after she graduated from Central State.  It’s sad to think about how everything came together.  It was sad because of our ignorance of things; like planning a wedding and having proper support.

When we told Terrie’s parents, her dad offered us $500.00 if we would elope.  It wasn’t because he didn’t want us to get married; he knew we didn’t have the internal support for all the preparation and arrangements.  Terrie wanted to have a church service, but neither of us were attending services.  It was arranged for us to use Regency Park Baptist Church in Moore.

I have been to several weddings in the last forty years.  The vast majority of them have had a lot of planning and expense.  Ours wedding was at the other end of the spectrum.  It was just put together without much effort or expense.  My mother made Terrie’s wedding dress.  We had few people attend because we didn’t know very many people and we didn’t send out wedding invitations.  And the time of the wedding was odd, 10:30 am.  No one gets married at 10:30 in the morning, but we did.  We needed to travel to Arkansas for our honeymoon and we had to be there at a certain time, so we had to leave shortly afternoon to allow for travel.  I looking at the few photos we have of the wedding (no photographer either), I often thought everyone, except for me and my sister, Brenda, looked sad.  I would like to offer an alternative thought, I think they may have just been up to early and were sleepy.

My Uncle Loy did the officiating.  It may have been the first time Uncle Loy or I had been in a Baptist church, but we both survived.  I remember him saying in his deep “preacher” voice, “I now pronounce you, man and wife.  You may kiss your bride.”  And so it began.

There was a thunderstorm that morning.  Lightening flashed and water drops fell from heaven, wetting the streets.  I was happy, eager and optimistic.  I didn’t know enough to consider how I could be a husband, a leader, a man.  Those thoughts had not escaped Terrie’s thoughts.  She was somber and concerned.  She was stepping out on the tight wire and not sure if she ha 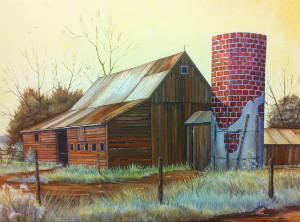 d a safety net.  She had made the greater step of faith than I had.

It would have been helpful if we had had counseling from a pastor or to have someone challenge me by asking me how I had planned on taking care of my wife, but there was no one.  We would learn about how to live together and for one another as we went along.  That would involve emotional bruising and scaring that could have been avoided.

We left the church around noon that day, to begin our life together.  We would rely on God’s hand to protect us and take care of us, to provide for us, to guide us…and we didn’t even know that was the only way our marriage would survive.  He had a plan for Mr. and Mrs. Steve Elkins that they were unaware of.  A plan that would change us and mold us, to move us away from self-centeredness to a Christ-centered marriage, but that would come later.

Somewhere in Eastern Oklahoma, we stopped to eat our first meal together as a married couple.  The restaurant was a Ken’s Pizza.  We sat across from one another, in a booth next to a window.  We held hands and looked into one another’s eyes and grinned.  We were alone and un-certain, but I knew I loved her and she loved me.  It would have to work somehow.  I didn’t have great examples to pattern myself, but Terrie’s parents were great.  I had learned a lot from watching her dad.  He was a good husband and father.  I wanted to be that too.

At the first of May, I had rented an apartment for us.  It was a downstairs, one bedroom apartment at Colonial Apartments in Moore.  It was about a mile from her parents’ house, which was convenient for both her parents and for us .  It was un-furnished, so we began to collect a few items of furniture, ‘few’ being the optimum word.  We had a couch, a chair, a dinette set of two chairs and a small table, a used black and white television with rabbit ears, a chest of drawers and a full size bed.  That’s it!  We may have had some end tables for the couch and bed, but no more!

I only had one pair of sheets for the bed, so the Friday night before the wedding, I slept on the bed without sheets or covers, because I didn’t want to mess it up.  Again, this place was very modest and all we had was used, but it was a starting point.  I would have liked to have had better, but I don’t regret it because we learned to value the things we did have.  We didn’t have a credit card and that was alright by me.

We realized Terrie would need to get a job.  She started teaching art lessons at a craft store that was located in a shopping center on Twelfth Street in Moore.  She had a few students that would crowd into a small room in the back of the store two or three times a week.  This led to her being an art teacher and professional artist for sixteen years.  She was very good working with students, some had talent and others enjoyed the social aspect of the art class.  There were many times, a student would come, set up their project and just talk and visit for the entire class time.

As her clientele developed, she started working more on her painting and creating an inventory of work, which eventually lead to being invited to art shows.

She had one young lady, who came to our apartment for private lessons.  As they talked during the lessons, Terrie learned that this ladies husband worked at Capital Steel, over on S. Agnew.  He worked in the shop, but knew that there was an opening for a drafting trainee in the office.  He suggested, through his wife, that I should apply for the job.  I did apply and got the job, just three months aft

er our wedding, I got a new job.

11 For I know the plans I have for you, declares the Lord, plans for welfare and not for evil, to give you a future and a hope.

Early marriage is exciting and scary!  There was much to learn and a lot of adjustments on both sides.  But will it last?  Did we have what it would take to make it last?